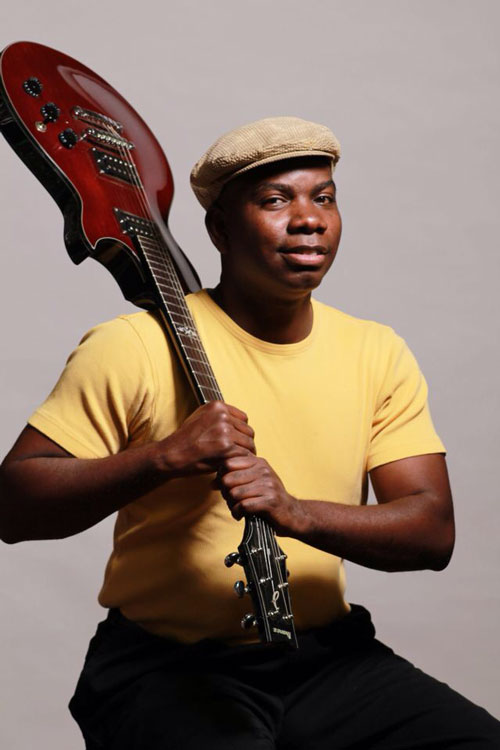 Posted at 23:26h in All Performers by mountainharvest

A legend in the making, Kipori Woods, currently living in Montrose, is a Blues, Funk and Funk Master vocalist and guitarist from New Orleans. Schooled under the direction of Ellis Marsalis, this fledgling ‘blues man from down south’ has won OffBeat Magazine’s Best New Blues Artist the past two years running. Kipori has also been nominated for a Big Easy Award as well as Best Song by the Offbeat Awards.

With his second album the man they call ‘Baby Wolf’ takes his fans on a musical trek, telling his story, from ‘The Day I Started playing the Blues’ to the ‘Hard Times’ and his aspirations for a ‘Big Black Cadillac’.

Kipori Woods is a young blues guitarist rich with the wisdom of ages. Early in his promising career, Kipori shows the maturity and control of a seasoned veteran and has the guitar chops to match.

Music became a part of Kipori’s life at an early age. His grandfather “Luscious” Lloyd Lambert, the legendary New Orleans bass player who worked with the likes of Ray Charles, Little Richard, Danny Barker and Doc Cheatham, raised him. From Lambert, Kipori learned the ins and outs of the music business.

Kipori’s first taste of the stage came while working with renowned gospel greats like the Zion Harmonizers and Raymond Myles. A funk outfit, Kipori Funk, Later let the budding artist stretch his talents in other directions, but the blues were always calling.

“I’ve always been influenced by the blues,” says Kipori, but it wasn’t until my grandfather passed in 1996 that I really got serious about playing the blues.”

Taking his cues from masters like B.B. King, Buddy and Jimi Hendrix, Kipori’s sound blends blues classics and modern flavors. His fretwork is at turns fierce and playful. His songs range from blues ballads to jumping firetorms of sound. His vocals flow strong from a well that belies his age and often take clever, unexpected turns.

On stage, Kipori is an engaging entertainer with boundless energy. He moves as though his guitar were a part of him, becoming one with the audience in an escalating dance of seduction. Kipori taunts, teases, and tickles the crowd until they beg for more. When Kipori and the band get grooving, the whole club shimmies with exuberance.

“I just go out there and be me,” says Kipori.” I try to put on a good show because I want the people to have a good time.”

Kipori perfected his high-energy performance in numerous New Orleans nightclubs. His soaring set with Davell Crawford at the 1999 New Orleans Jazz and Heritage remains the talk of the town. Kipori has also toured extensively throughout the U. S. and Europe. He has shared the stage with notables such as The Neville Brothers, Wynton, Delfeayo and Jason Marsalis, Kermit Ruffins, Trombone Shorty, Dr. John as well as toured with the Dirty Dozen Brass Band for almost two years.

In 1998, Kipori’s self-produced debut CD, “Blues Man From Down South,” garnered enthusiatic support from local and national reviewers. The CD Sizzled with kipori’s clever urban blues and featured a rich texture that included hints of New Orleans funk, soul swamp groove and jazz. However, ‘The Baby Wolf’ has matured, giving him a sound of his own and labeling him as one of the Big Easy’s premiere blues performers. So come along and take a bluesy ride in Kipori’s ‘Big Black Cadillac!’ also check out Kipori’s Latest cd ‘Blues Gone Wild’!